The other day someone found my blog by searching “2014 world series star bangle” which is pretty awesome. At least I thought so, until I realized no, this is not a fellow bangle and baseball officiando, this is some dumbass who thinks the song is the Star BANGLE banner. SMH so hard.

Because I am occasionally helpful I figure I’ll give that star bangle googler the object of their literal search. Now I don’t know if they were a Royals fan or a Giants fan, so I hunted down jewelry for both.

Kansas city Royals. They have that one pitcher with the evil eyebrows. Not Guthrie, he’s the Mormon pitcher. For their fans Fans Edge offers this $14.95 silver “tone” bracelet. Silver tone means it’s not sterling, which maybe matters to you maybe doesn’t. I don’t even know enough about Kansas City to make a crack about it by saying “oh you people from that fancy Kansas City neighborhood don’t even want it when it’s sterling”… Like they are so fancy that it’s got to be pearls and sapphires or bust. But hey, at least I chose the correct colors of your baseball fan fancy gems.

For the fancy Giants fan there is Daniels Jewelers special edition sterling five charm bracelet for $269.95.

Rumor is too that Tiffany’s makes annual world series champion charms. Alas, the Giants charms from 2010 and 2012 are not to be found.

For the non fancy Giants fan we have this collectible piece.

Made from SF Giants beads and old barbie shoes. I’m not certain what Barbie shoes have to do with baseball, but so I’m guessing this $5.50 bracelet is not licensed by either Mattel or MLB. What you save in price you sacrifice in official licensing. Either way, there’s plenty of tiny black and orange high heels to go around.

Now don’t feel all left out and butt hurt Yankees fans. Your late 90s and Jeter glory may be over but if you act fast there’s a sterling silver Yankees charm bracelet on the Goodwill website. Auction closes Oct 29. There’s currently just the two bids which put the bracelet at $20.99. 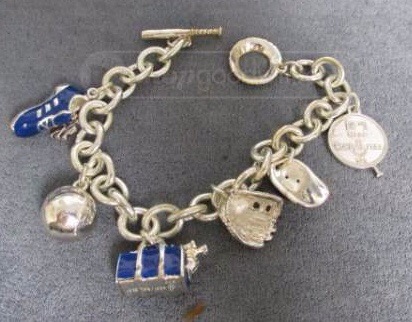 I took a brief break from typing to consult with Leroy on his baseball jewelry needs. It turns out he’s not all that interested in this blog post. So there’s that. Not everyone is a baseball fan. For the rest of you, enjoy the game tonight!