One of the interesting things about long term relationships is you continue learn about your partner, and yourself thru them.

For example, my husband and I were driving to the supermarket the other day and I brought up the saying “first is the worst, second is the best, third is the blue bird sitting in the nest” (alternate ending is “third is the man with the hairy hairy chest”)… He had never heard this before! Granted, he grew up all over the place but not here, where I did. So I figure this must be a regional saying.

I know for a fact Ro Sham Bo is SF regional, but that’s a game not a saying. Rock, paper, scissors is what everybody else calls it.

But then I wondered about other kid rhymes. “No cuts, no butts, no coconuts”? Nope. I asked what he said to the kids who cut in line, and he didn’t offer much by way of explanation.

I didn’t even bother with the girl oriented ones like “Cinderella, dressed in yella, went downstairs to kiss her fella, by mistake she kissed a snake, how many doctors did it take?” I can pretty much guarantee my honey did not double dutch.

Just now I thought of “trick or treat, smell my feet, give me something good to eat”, he’s got to know that one, right? I’m texting him STAT.

BREAKING UPDATE: he knows the trick or treat one!

What did you say as a kid? Do you recognize any of mine?

Why’s that, Margaret? You may ask. Well, for a variety of reasons.

(Wouldn’t it be funny if I ended this post right there after that sentence?)

Both shows star excellent actors. It’s when we get to the secondary and tertiary ones that there’s an issue.

For HTGAWM the tertiaries are great (Hello, Paris from the Gillmore Girls- you are awesome!), but it’s the secondaries that suck. I’m sorry but Alfred Enoch who plays Wes may be beautiful, but his acting depth is flat as cardboard. The fellow law students aren’t much better with the exception of Matt McGorry who is also excellent in Orange is the New Black. But maybe that’s how the characters are written? It’s great that they have a smart gay character, but really? Must he be the oversexed, promiscuous gay man stereotype? I suppose it’s a credit that he’s not super mince-y and flamboyant. But in a show as actively diverse as HTGAWM these are small complaints.

My big complaint is the dawdling repetitious flash forwards. We get it! They must hide a murder during a school bonfire and that one girl lost her engagement ring, must we cover this same ground every week? Stop with the stupid flash forwards already. Really, the flash forwards just drag and drag and drag. I don’t understand the purpose. I want action! And court room! And Viola Davis torn between trust and distrust in her home. Is she a badass? Yes sir. Let’s focus all of the plot on her because she carries the show. Stop wasting our time with these boring but pretty first year law students.

Now Forever is also a show that very heavy handedly relies on the flash device. But episodes flash back in time instead of forward. Which is fascinating because Henry Morgan’s lived in NY for a hundred years. I’m so intrigued by the evolution of the city, and Forever very liberally offers us glimpses of this.

Also interesting is the concept of Henry Morgan’s immortality and repeated resurrections. He dies, and pops up naked in the river after a varying amount of time. He has a unique relationship with death, which they examine in the show. So interesting! My one issue is this: what happens to his clothes? They aren’t left behind at the scene of his death even though his pocket watch sometimes is, but they aren’t on him at his resurrection. Do they go to that same place as all the mates of my socks? Can you please address this issue, writers of Forever? It bothers me every time.

My other issue is his wife Abigail and her god awful English accent. Stop it, fellow Americans. Stop doing your bad English accents. Either perfect the accent or change the character, make her American. Abigail’s “Fancy a spot of tea? Mind the gap!” fools no one. She IS the weakest link.

Finally, Forever could use a couple of non-white characters. I guess there is Vee from OITNB as the head cop (Sergeant or Captain maybe?) but that’s it. If Ioan Gruffudd wasn’t so talented and spectacularly good looking I would ask why do we need another white male starring police procedural? But he is both, so I ask instead, why aren’t there more non-white characters? It’s a cop show, there’s plenty of opportunity for it.

Anyway, I mentioned earlier Henry Morgan’s pocket watch. I have a real soft spot for pocket watches, especially antique ones. 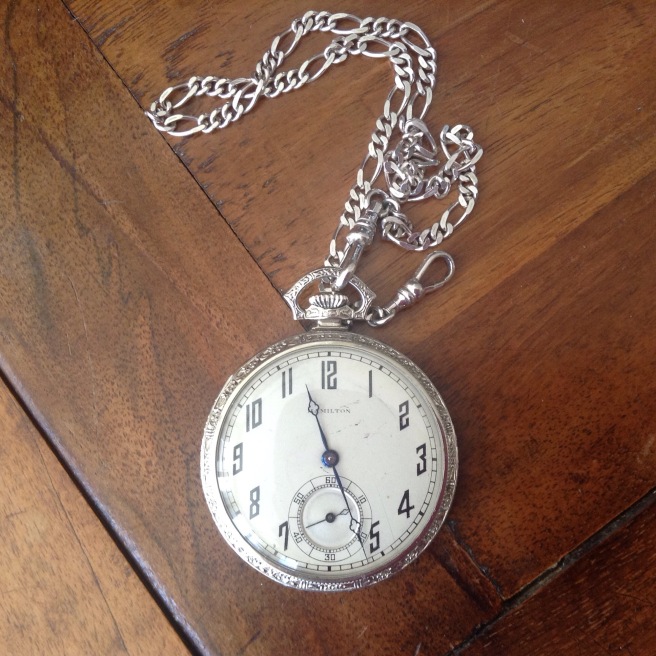 This is the white gold vintage Hamilton pocket watch I gave to my honey from Hutten Jewelers. I know I’ve mentioned before Isabel and Robertino and their old world charm. This watch was a fraction of the price of the new non-gold Hamilton watches. And it’s beautiful.

With all of us using our cell phones as our clocks, not many people wear time pieces any more. But I see vintage/antique beauties like hits one everywhere. Secondhand stores, Ebay, Etsy. 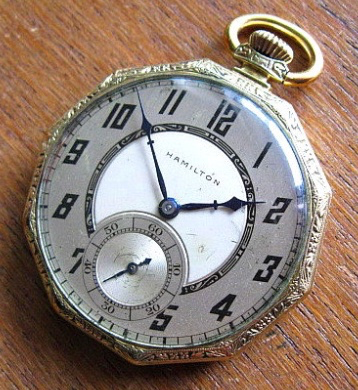 There you have it. I recommend both HTGAWM and Forever, but I recommend Forever more. And pocket watches are da bomb! (Sorry for the flashback to 1996)